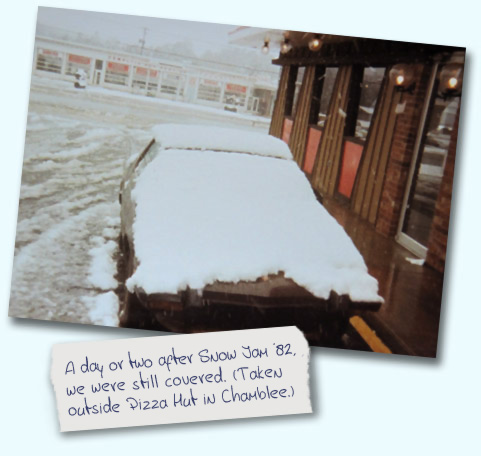 A Day to Remember

My name is Tom. I’m an Atlanta native and have seen a lot of ‘interesting’ weather in Atlanta over the years. I remember the 1973 huge ice storm that did so much damage in and around Atlanta, but I was young and my memory of it really isn’t that vivid. (Though cooking over the fireplace and being without electricity and heat for many days is hard to forget!) But on Tuesday, January 12, 1982, winter hit the South with an unusual ferocity. The traffic, travel and tales of the day are etched into the memories of almost all who lived through it.

As predicted, snow started falling in the afternoon. The ground was frigid from the recent extreme cold snap, so what fell, stuck. And fast.

The Georgia DOT, or maybe just the TV and radio stations, advised businesses to close early so everyone could get home. Afternoon rush hour in Atlanta back then typically spanned from about 4:45 till maybe 6:15; urging everyone to leave at once would have been chaos on a good day. And from a traffic perspective, this was not shaping up to be a good day.

So a little before 4 pm, I was getting onto I-285 at Northlake Parkway. It was brutally cold and snowing hard. The freeway was already clogged with Atlantans trying to navigate the increasingly snow-covered roads. However, seeing that the back roads already were becoming treacherous, and only going the short distance to Peachtree Industrial Boulevard, I took the road more traveled, I-285.

Heading down the ramp, I spotted a man walking toward the highway. Not trying to hitch a ride, just walking. A well-dressed man, carrying a nice, expensive-looking briefcase, heading toward 285. On foot. I stopped and asked if he wanted a ride. He gave me a good look, and—in that situation—we both put our trust in a complete stranger.

I asked where he was going and, of course, why he was walking. As for why, he was unable to get his car out of his office’s parking lot which was on a steep hill. Then he said, “I’m going all the way to Marietta, just take me as far as you’re going.” So into the motorized, Kamikaze-filled skating rink we drove.

It didn’t take long to see what an adventure we were in for. Many, if not most, drivers were having a difficult time maintaining their lane in the stop-and-go traffic. In 1982, most cars were rear-wheel drive and, without chains, didn’t have the traction for snowy roads. Cars were sliding into one another. Tractor trailers were performing slow-motion jackknife maneuvers. It reminded me of bumper cars at Six Flags, except with a lot higher stakes!

Now I loved driving in the snow (I was young), and ‘practiced’ every Winter when we got our single, annual snowfall. Guys, you know what I mean by ‘practiced.’ My trusty 1973 Volkswagen Beetle also was rear-wheel drive, but the engine was back there as well. So between having some weight over the drive wheels, new tires, a bit of skill in Winter driving and, no doubt, help from above, we successfully negotiated the fallen and the falling. And what an amazing sight! Fender benders everywhere. People getting out of their cars with a ‘Well, what do I do now?’ look on their face. And then, folks actually abandoning their cars ... right in the middle of I-285! Still, on we drove. Slowly. Carefully. Literally zigzagging through the morass.

As we approached my planned exit, I knew I couldn’t leave my new friend on the side of the road. So we kept motoring toward his exit. And it really wasn’t that much further. Normally.

He was in his late twenties; me, about twenty. He related that he was newly married, and didn’t want his bride to be home alone in the storm, hence his dedication to the journey. And by now, we were actually having quite a good time. Honestly, it was hard not laughing at the scene. We were making comparatively good progress, despite dodging collisions constantly. I don’t recall exactly how long it took us to get to his exit, but it was several hours and completely dark when we finally got off 285. He said he lived in some apartments at the top of a hill and that I just drop him off at the bottom, though I think he knew I wasn’t about to stop till he was all the way home.

Sure enough, stopped at a traffic light, you could see the incline would indeed be a challenge. In fact, there were members of the National Guard (I think) there actually helping push people up the hill. As we approached, I said, “I think we’ll be OK.” And despite their warnings, we did in fact make it up the long hill. Good traction on that old Bug!

We pulled into his complex and made our way to his building. As we sat in the car, he thanked me for the ride and urged me to come in, get warm and spend the night, if I wanted. The getting warm part was all it took, so we made our way down the sidewalk toward his apartment. But, all of the sudden, I hear, “Oh #&@%*!” His wedding band had slipped off and fallen into the snow. So, we got flashlights and looked. And looked. And no ring. The newlywed had lost his wedding ring.

When we finally gave up on the ring, we headed back inside. His wife, who had not known for hours where her husband was—no cell phones in those days!—made us hot chocolate and listened intently as we told our story and laughed all the more.

He again asked me to stay, but I really wanted to get home as well. And given the successful completion of the first leg of my ‘journey,’ felt I had to complete the trip! So off I went, down the big hill and back on 285. Almost everyone by this time had reached their destination (whatever that turned out to be!), so it was not nearly as chaotic at this point.

The drive back to my home in Clarkston was not nearly the adventure of the first half of the trip, but it was no cake walk, either. The roads were still challenging, and there were hundreds of abandoned vehicles to dodge. Thanks to the non-existent defrosting of the air-cooled 70s VWs, I had to stop every few miles to scrape ice off the windshield. Only one problem: no ice scraper! So, about every five minutes, it was my Macy’s credit card to the rescue. Not sure if it ever worked after that night, but it worked on that night!

It was about 2 am when I finally made it home. Utterly exhausted, I collapsed and slept like a baby.

Little did I know that for many years to come, the experiences of the day for me, and countless thousands of others across the city, would be a memory we would look back on and retell with such fondness!

Every picture tells a story. Here are some from Snow Jam ’82.

Thanks for reliving the memories of this day with me. I’d really like to find additional photos from the storm, and would love to hear your story as well. If you have photos or adventurous tales from Snow Jam ’82, please . And check back soon for updates.